Okay, I know what you’re thinking… This beach isn’t actually on Lake Superior. You are correct. But its on the Portage Canal, which is Lake Superior – made so by the hands of humans whose mettle disallowed mere topography to impede their conquest of land, water, and soil. It is also where I began my own conquest on a Friday afternoon, the 31st day of July 2009.

This particular Friday was advertised to be spectacular weather for the early portion of the day. I had told a grand total of three people about my planned adventure – one of them being my sister who was more than enthused about coming along. The planned trip for the day was from Houghton to Marquette. I was free for the day, however, Maija had to work – meaning we couldn’t leave until the afternoon. In the morning I made a trip to WalMart to buy a beach-ball. Actually, I really wanted a floating lounge chair and I wanted to take pictures floating in the water drinking ***(beverage of choice)***. That would’ve been fun, but I’m glad I couldn’t find what I wanted and ended up getting the ball. My signature pose with the ball and UP hand was the way to go.

We headed South from Houghton on US-41, traveling a quick 9 miles to the Chassell Waterfront Park. I’d never swam at the beach before, only glanced at it a few times while investigating the Strawberry Festival. A beautifully sunny day on the Portage Canal… BTW, this is one of my favorite shirts. Yooper Road Trip, from Touch of Finland in Marquette. 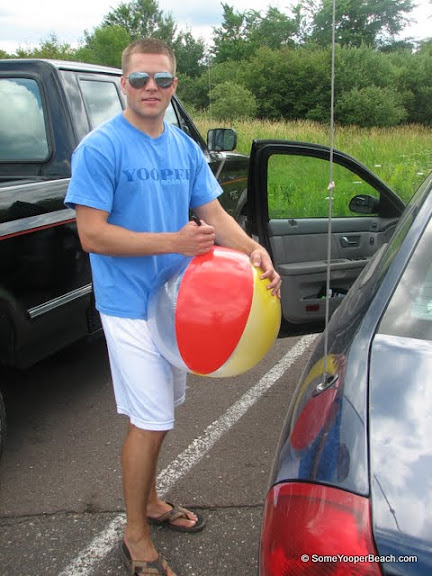 First stop... where it all began

The Chassell Waterfront Park includes a playground and boat launch. The sheltered Pike Bay tends to be calm and is a popular launch site for fishing boats and personal watercraft. The beach, however, is small. The swimming area is marked with buoys, and a platform floats 50 feet out from shore. Kinda cool, I thought as I prepared for my first dive. 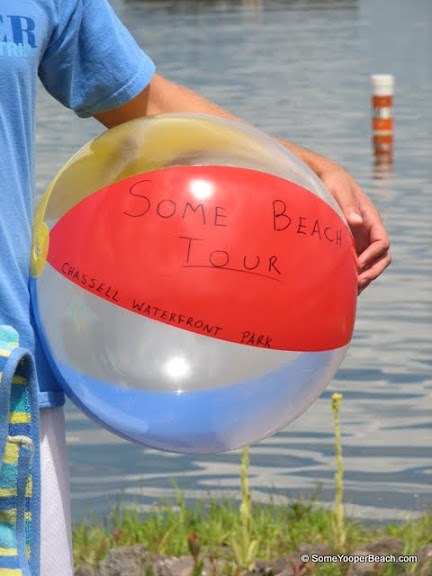 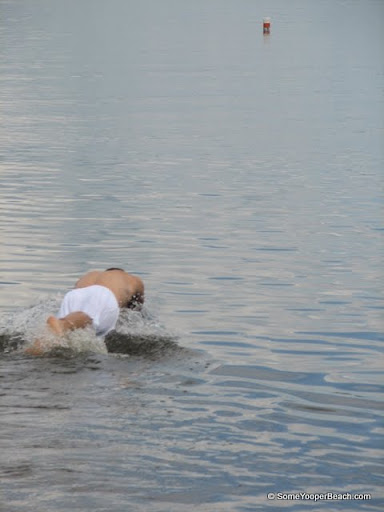 As I expected, the water was warm. Unexpectedly, the water was full of plant matter and smelled like wet dog. The water in the sheltered bay is too stagnant, allowing plant matter to grow along the bottom. I don’t mean to offend anyone partial to this beach, but I certainly wouldn’t recommend anyone travel very far to go experience it. It’s a pretty spot and the South shore of the bay looks like it has some nice real estate, but stopping here would be like getting coffee from a Citgo when you know there’s a dozen Holiday stations up the road. He that can have patience, can have what he will – Ben Franklin. It was a less than amazing beginning to my adventure, but I had to start somewhere. I promise the beaches get better. Oh, do they get better…

For in hope we were saved. Now hope that is seen is not hope. For who hopes for what is seen? But if we hope for what we do not see, we wait for it with patience – Romans 8:24-25. Keep hope, have patience.