“In the beginning God created the heavens and the earth… God saw all that he had made, and it was very good.” Genesis 1:1, 31 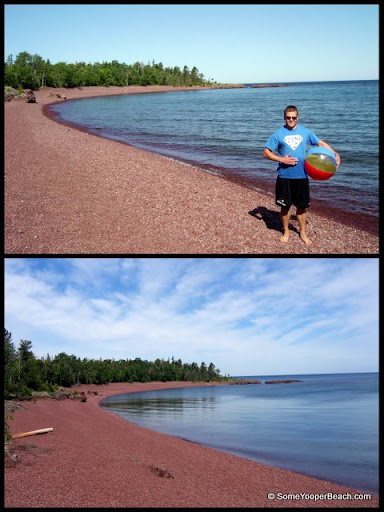 Red-Pebbled Beach... This place is nice.

God’s work is very good, indeed. This is merely a beach – just a wee-bit of land – but its beauty radiates like the glow of a late-night campfire. This yooper beach is, surprisingly, not very popular. The location is a bit off the beaten path and is not well advertised. Hopefully I can spread the word. People who know me well know that I’m honest, and that I don’t embellish my opinions. If I ever appear to over-exaggerate the way I feel it’s not I who is mistaken, for I can assure you I’ve given enough thought to be confident in what I’ve said. 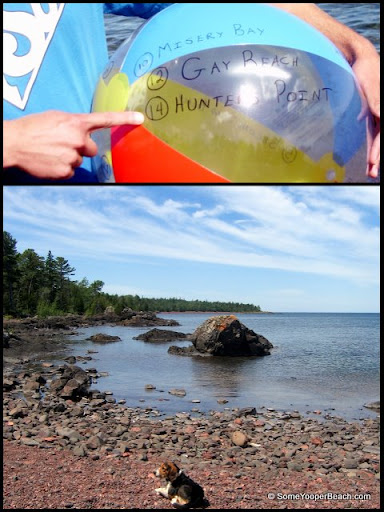 Hunter's Point is less a beach, and more an adventure.

I was first introduced to this beach in early July when I took a trip to Fort Wilkins to visit my parents, who were taking a small camping vacation. They took me just south of Copper Harbor, down an inconspicuous and poorly maintained road which made an abrupt end in a large parking area. I was surprised to see a nice visitor’s sign advertising the Hunter’s Point hiking trails. A well constructed boardwalk led out to a magnificent view of the red-pebbled beach and dark-blue water. Cool, but that’s not all… 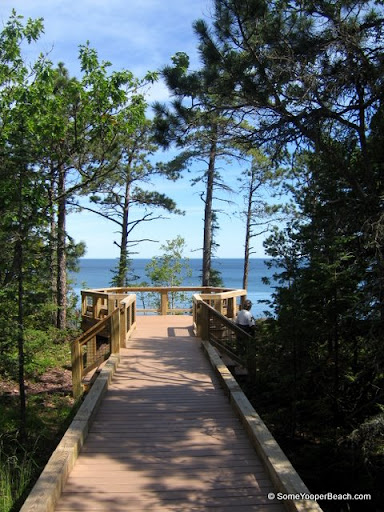 The first cove by the boardwalk is a magnificent sight, and a trip down onto the beach is worth the time. The rocks are smooth as glass, making every pebble a treasure worth taking home. It is worth going to the beach on a windy day as well – to listen to the waves. Waves on a sandy beach create a sound familiar to us all, but waves on a beach of pebbles gives a little more to wonder about. The waves crashing on rocks makes a louder and crisper clamor. The interesting sounds occur between waves, as the water and small pebbles cascade back down to the lake. The water also drains down through the rocks, causing a quiet but distinct noise which is difficult for me to describe other than that it sounds like a bowl of cereal just after pouring in the milk. But the full experience is not in the beach alone, but also in the hike out to the point. A network of trails leads out along the narrow peninsula which protects Copper Harbor from the lake to the North. A walk along the North shore will give appreciation to the untamed nature of Lake Superior, given the rugged construction of basalt rock formations and the obvious effects of incredible storms. Hunter’s Point is a pretty spot and likely locale to find a rock hound or two. But someone who wants to complete the adventure will need to ford a treacherously slippery gap of water between Hunter’s Point and Porter’s Island. Check out the shoreline viewer. 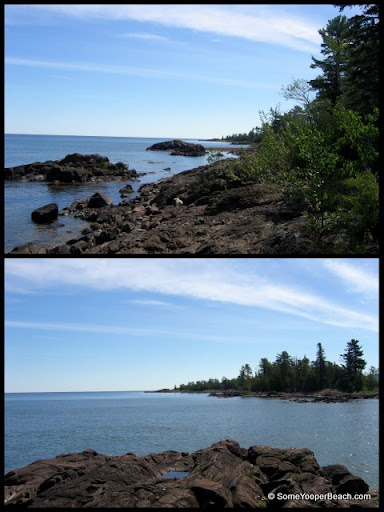 Heading up the shoreline.

Porter’s Island is a very neat experience. The south side has a short, rocky beach crowded by tree-growth. The eastern end becomes rockier and the trees yield to low growing bushes, thorny shrubs, and berry patches. Some very neat basalt rock formations adorn the tip and beg for hikers to risk their ankles to explore the nooks, crannies, and precipitous ledges. A few large rocks also protrude from the depths farther out in the water, begging a swimmer to come chase away the flocks of birds basking in the summer sun. The northern shore is similar to the hike along Hunter’s Point, yet is distinctly unique in the perception of its seclusion from human interference. There are also several coves along the shore with magnificent stretches of the smooth, red-pebble beaches. 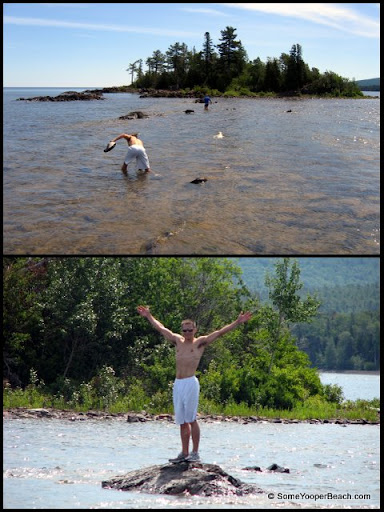 This is not worth trying without your shoes on. That's Porter's Island 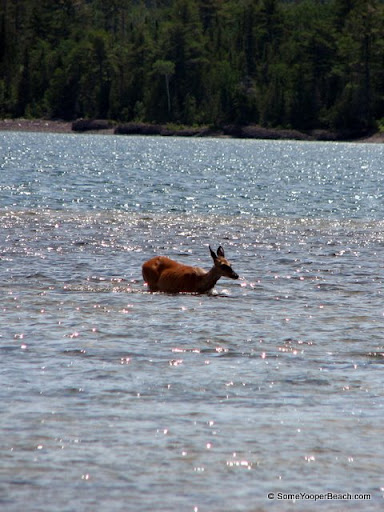 A deer crossing from Porter’s Island back to Hunter’s Point.

This may not be a great beach for swimming, camping, sun-tanning, or picnicking, but it is a beach for an adventure. The adventurous person could, however, do all of these things. Keep in mind that the weather is often windy and can be pretty chilly, even in summer. Click here for the whole collection of Hunter’s Point pictures. To get to Hunter’s Point, drive 1/4 mile West of Copper Harbor on M-26, and turn North on the only road you’re going to find. Another 1/4 mile and turn East at the T-intersection. Drive another 1/4 mile until the road ends. 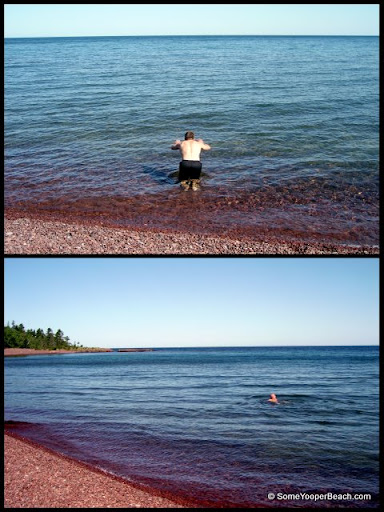 No lifeguard on duty.